jbo:
Joyfully Believing in the One who was, who is, and who is to come...
goal bible thoughts , blogging

A fool takes no pleasure in understanding,
but only in expressing his opinion.

I read that on Tuesday, and I thought what a perfect verse to underpin a blogging purpose statement. My goal should be understanding...not just expressing my opinion.

On a side note, I am going to keep this verse in mind when I post on Sharper Iron.

Posted by micah at 03:27 PM
the week after update

I went to Duke on Thursday, June 23. Christa was able to take me because she is on summer break. I have now been driven down to Duke by all of my family members. I'm sure they are thrilled.

There is some good news. After considerable trouble on Fred's part (the Advanced Bionics technician assigned to me), my programming is now updated and helping me. I received a new remote control (same model though). The old one wasn't communicating with his laptop for some reason. Which is what precipitated the former programming disaster.

Christa and I had a nice drive. It wasn't too bad at all. And we went to Arby's.

I really wish I had had my camera with me. I really need to start bringing it when I go on trips like that. I was sitting there in front of the courthouse, I looked up at the columns and the letters and I knew I would have had a good picture. I have missed out on some good pictures in Durham, NC, also.

So my midyear's resolution is to start taking more pictures. I have always wanted to be more of a photographer (like my dad), but I feel intimidated by the camera. Does that make any sense? No. I'm sure. I've had a few photos from the lake around here. But since then, I haven't done too much. Oh, and as a non sequitur, I plan to learn how to play the guitar this summer.

Friday we rehearsed for Dianna and Greg's wedding. The instrumentalists met at the church at 2:30. We had flute, piano and violin. Our practice went very well. The vocalists arrived at 3:00 and we were able to practice then and after the rehearsal dinner. 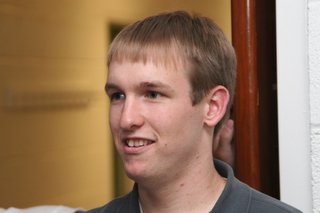 The music was
Be Thou My Vision
Guide Me Day by Day
O Perfect Love
Make My Life an Alleluia. 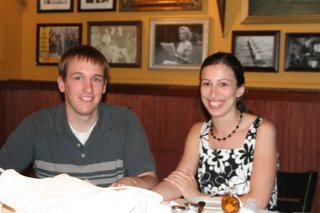 After the rehearsal we all met at Vivo's Italian Eatery for dinner. I had crème brûleé cheesecake for dessert. It was very good. I was disappointed that it only had one small strawberry as a garnish, especially with someone close to me eating strawberries and cream.

The wedding prelude started at 10:35. Everything went relatively smoothly. I played music from Emma and Pride and Prejudice. The flutist and violinist played Canon in D and Jesu, Joy of Man's Desiring.

I am going to work on orchestral versions of the Bridesmaid's Trio, Procession in D and Allasse as Sinya Yess ("Joy with New Beginnings," the recessional). Unfortunately, we were unable to do recordings of the music on Friday. But we have live recordings. I was hoping to put a CD together for Dianna and Greg from recordings done at rehearsal using uncut music. (All three songs were trimmed because the walk down the aisle doesn't take as along as I imagined.)

The wedding itself was beautiful. I could actually see Dianna and Greg from the piano (I couldn't see Danielle and Brian at their wedding). Everyone enjoyed the music.

The reception was held at the Greenbrier Country Club. It was a lovely reception, and the food was delicious.

There is so much more to come on this topic. And I have many other pictures I would like to post.

Posted by micah at 07:37 PM
blessings in the mail update

I got a letter from Duke today. It was about the bill for my the trial SCS. They decided because of my joblessness due to my illness that they would cover 100% of the bill left over after what insurance paid. This was a lot of money. What a blessing from God! His grace is amazing.

I really didn't expect this at all. It was out of the blue. I really only filled out the forms because I needed to pay the bill off slowly, over a longer period of time.

This is such a great reminder how God wants to bless us and take care of us. He knows what's going on. He is the God who sees.

Posted by micah at 01:18 AM
science and ethics in the news

Why do I hear "these rules are for a reason"?

I forgot to put this picture up. Mr. Sweede took it at Bob Jones Graduation on May 7, 2005.

Dianna and Greg are getting married a week from Saturday! And thank God, I am done with the music!