jbo:
Joyfully Believing in the One who was, who is, and who is to come...
books and duke update

Well, we left at 6am this morning for Duke and got back home at 6h30pm. Not too bad for a day trip, right? I am ashamed to say, I slept most of the way there and back, but I didn't feel good. My mom had her Spanish tapes for company on the way back. She said practicing them is exhausting work. I believe it. Especially while driving in the dark and rain.

I had two appointments today. One at the Duke Univ. Clinic, where I had my preoperative appointment. They checked me out, took some blood and repeated the procedures I'd have to follow for Monday's surgery. Then we had lunch and headed over to my other appointment at the Pain Clinic. That appointment I was an hour and a half early for. But it really couldn't be helped since I had to come for the preop appointment. I managed to get back into Orson Scott Card's Ender's Game. It is about a futuristic earth at war with the "buggers"; the space force is looking for a general to lead the earth forces against these aliens that have almost annihilated earth 60 years before. They think they have found their general in a genius 6 year old, "Ender" Andrew Wiggin.

I have read the book before about 5 years ago, and I liked it. I went on a Card binge then, but I didn't read anymore of the books in the Ender Saga. I read other books by Card. One a fictional narrative called Sarah about Sarah and Abraham. How they met, and their entire lives. It was good if I recall it correctly. It was very interesting. I liked it a lot. If I remember correctly, Card wrote 3 books: Sarah, Rebekah and Rachael. But I never made it to the next ones because of school. I mean to read them some time. I have many such books on my list. Orson Scott Card is a Mormon. And he provides an interesting perspective on the biblical narrative. Especially his ideas about Sarah's barrenness, and Abraham's omission to Pharaoh about Sarah being his sister-wife.

I am reading Ender's Game now because Kyle has read the series, and he has been at me for ages to read them. I have wanted to, but I have very eclectic tastes with books and I am very finicky with what I read. I usually read several books at a time and can put a book down for weeks sometimes. I have a very good memory for the written word, so I can pick it up later and be right back into it. That's that way I work many times. Other times, I will go straight through something. Or a whole series like the Wheel of Time.

Posted by micah at 11:46 PM
Thankful for Thanksgiving update 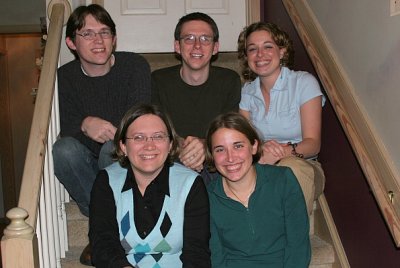 We had a good time at the Sweede's house for Thanksgiving. They are a wonderful family in our church. We had a 19 1/2 pound turkey, rolls, rolls and more rolls. I like rolls. And pies and cake, and coffee (yuck) and tea. We talked about all sorts of stuff. Which means there were many literary references, and several English majors jokes.... We played a few rounds of Uno, which I lost every time (although, I did manage to start a draw-two pile that went all the way around to the person next to me--draw 10). It was good times. I'm too sleepy to write more. I am so thankful to God for my family and friends, for my church and all God has given me

Posted by micah at 02:02 AM
stargazing fun

I was about to go to bed tonight, but Kyle called me outside to see the night sky. Before we went out, I opened my Sky Calendar to check the position of the planets. Saturn and Mars are very visible this time of year, and after midnight very easily seen. Saturn was a bright bluish twinkle. I have never seen it twinkle so much. And Mars was actually red! The full moon looked beautiful too straight over head and Mars right near it. It was beautiful. We could see quite a few stars, which is unusual here because of the airport and city, but I guess it was late enough and clear enough to see them.

We think we saw several famous stars. I consulted my chart inside afterwards, so I didn't have a clear picture in my mind. Anyway, it was fun, and I am so grateful for the marvelous beauty of God's creation.

25 "To whom then will you liken Me
That I would be his equal?" says the Holy One.
26     Lift up your eyes on high
And see who has created these stars,
The One who leads forth their host by number,
He calls them all by name;
Because of the greatness of His might and the strength of His power,
Not one of them is missing.
27     Why do you say, O Jacob, and assert, O Israel,
"My way is hidden from the LORD,
And the justice due me escapes the notice of my God"?

Yesterday, my 2nd surgery for my spinal cord stimulator was scheduled. The day is Monday, December 5. So I'll probably going up there on Sunday afternoon. The surgery last time was in the early hours of the morning.

This time, I'm hoping, it won't be as bad. It will focus on the leads. That's what the doctor will try to fix.

Posted by micah at 11:15 AM
surgery here I come RSDS

Well, the title says it all. The reprogramming of my SCS didn't work. Therefore, the choice left to me, revise the system. And that must be done surgically. Even that has a chance of failure because we still don't know what has caused this problem.

But on the bright side, hopefully this will be the last surgery I have for a while.
I haven't scheduled it yet. But I am going to soon. There may be one more appointment with the surgeon, but I expect he will just want to get the surgery over with. Me too.